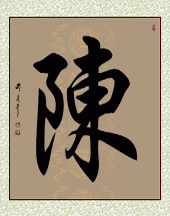 This document traces the history of my maternal grandfather's family from it's beginnings in China's mythical past to the founding of the Ying Chuan branch of the Chin clan 潁川陳氏 in Henan Province, through to settling in Chachau Village 六村槎州 in Toisan County, Guangdong 廣東省台山縣 at turn of the 18th century.

[6/18/2021: I have made the following updates to this document to more closely match the family tree in Hanson Chan's book Finding the Direct Bloodline of My 111 Ancestors in China:

See Oops! Mistakes in the Book for the reasoning behind these changes. ]


at May 25, 2021
Email ThisBlogThis!Share to TwitterShare to FacebookShare to Pinterest
Labels: Chen, Chin, Genealogy

Thanks Doug. Hope you're doing well.

Kenneth, Consider joining our group Bay Area Chinese Genealogy Group (bacgg.org) You have a lot of expertise. If not join, then just subscribe to our mailing list here: https://bacgg.org/index.php/about/

Thanks for the info. I would love to attend the BACGG meetings, but I'm living near Philadelphia now. So, for now, I've subscribed to the mailing list.

Malvern, PA, United States
I am a fourth-generation Chinese American with roots in the San Francisco Bay Area and Toisan County, Guangdong, China. I'm an amateur genealogist and family historian. I ski, cycle, swim, and use to play water polo, and I've been away from pool for way too long. An avid traveler, I've hiked the Inca Trail, dove the Great Barrier Reef, and trekked the Silk Road.

My grandfather HONG Hock How was born at the end of the Ching Dynasty in Dong An Village, Taishan County, Guangdong Province 廣東省台山縣東安村 ...