My grandfather CHIN Pak Yick, his first wife LEE Moon Yee, and my grandmother TSO Mee Shew raised what is arguably our family's greatest generation. This generation, the third generation of Chin's in the United States, all born in America, includes twelve of my mother's brothers and sisters who have over 190 years of combined U.S. Military and U.S. Government service. They served in Europe and the Pacific during World War II, in Korea, and in Vietnam. They also served with distinction at many levels of the U.S. civil service. All U.S. military service was completed with honorable discharges, and U.S. government service with retirement after many years of service.

Like most people, the Chin brothers and sisters were a product of their times. They came of age when many young men and women heeded the call to serve their country and fight fascism and authoritarianism abroad. They also grew-up at a time of segregation and exclusion in the United States when the federal civil service provided one of the best (and often only) opportunities for hard-working, dedicated minorities to make a good middle-class life for themselves and their families.

The Chin Family in the U.S. Military

My mother's eldest brother, Bruce Chin (1919-1988) served in the US Army during the invasion of Europe in World War II. He served three years with tours in Paris and Germany while both were under the boot of the Nazis. He was later assigned to General Dwight D. Eisenhower.

[Note: Willam Chin compiled this record of service to the United States for his generation with the help of his brothers and sisters and their children.]

The Gateway to Guangdong: Pearl Alley and the Plum Mountain Pass

The Pearl Alley or Zhujixiang 珠璣巷, Nanxiong is in Northeastern Guangdong province was a wealthy town across the border from Jiangxi province. As Han Chinese families migrated from the Central China to Guangdong, for many Pearl Alley was the first stop after traversing the Plum Mountain Pass or Meiguan Pass 梅關 through the Nanling Mountains 南嶺山. As such it could be consider to be the Ellis Island of Guangdong.

The Nanling mountains separate the Yangtse and Pearl River watersheds and are located at the junction of Guangdong, Guangxi, Hunan, and Jiangxi provinces. The mountain range elevation averages 3,000 feet with peaks as high as 6,000 feet. The ancient Meiguan road was first built in the Tang dynasty (618-907 CE) and covered the more than 75 miles between Ganzhou, Jiangxi 贛州江西, in the north and Nanxiong in the south. The road quickly became the main north-south trade artery and accelerated the shift of China’s economic center of gravity away from the central plains and toward the south. The pass was named after the numerous plum trees planted along the road.

Oops! Mistakes in the Book

History is not the study of cold facts but the interpretation of the past through available evidence. This evidence may include records of events (like a newspaper's recitation of who, what, where and when) or interpretations and analysis of those events (how and why). Both of those are subject to mistakes and bias. Many genealogies were lost in mass wartime migrations. With the social and financial importance of genealogies in traditional Chinese society, it also would not be surprising for some people to claim a more influential lineages to move up in society. Some genealogies were completely made up, with professionals going around using templates then fill in more information supplied by the clients. Other times overrun indigenous tribes in north and west of China wanted to blend in with Chinese society.

The Chin family genealogy, which was given to me by my maternal grandmother, has the following note on page 8:

These discrepancy may be attributed to poor record keeping or lost records during the times of war, chaos, and mass migration that occurred throughout Chinese history. But the self-acknowledge mistakes in the Chin book also points to the important aspect of historical records, which is that they may have conflicting facts and are not always reliable. 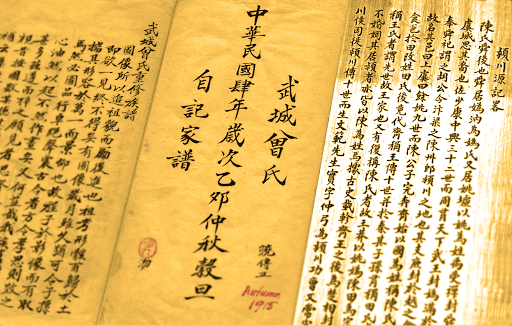 In China, clans or kinship ties are based patrilineal groups of related people with a common surname sharing a common ancestor. In southern China, these ties were often strengthened by a common ancestral village or home, where clans had common property and a common spoken patois that was unintelligible to outsiders. Following Confucian tradition, each family maintained a registry, called a Zupu 族譜 in Mandarin, that contained the clan's origin stories and its male lineage.

The background image for this website is a composite of three pages from the Hong and Chin family registries. The left and center pages were hand copied by my paternal grandfather, Hong Hock How, from our ancestral village registry in Dong On 東安, China (Taishan County, Guangdong). Hock How used a booklet made of thin, translucent paper with a hand-stitched, stab binding. The page on the right is from the introduction to my mother's Chin family registry for our ancestral village Chazhou 槎州 (Taishan County, Guangdong). My copy appears to have been photocopied several times. It also had a hand-stitched, stab binding, which I removed in order to digitize the book, then re-stitched myself. It was given to us by my grandmother, but its author is unknown.

In Chinese tradition, the eldest person in the clan was giving the very important task of maintaining the clan's registry. When families settled in a new area, they would take a copy of the registry from their old village to use as the starting registry for their new branch of the family. As a result, family lineages in China can be traced back dozens of generations and thousands of years, at a minimum going back a clan's first ancestor to settle in a county or province, and often going all the way back to a China's mythical past.

Hock How was following in this tradition when he made a copy of of the Zeng Family Registry prior to his voyage to the United States in 1915. During the Chinese Cultural Revolution, many family registries were destroyed as relics of China's feudal past. Since China opened up in the 1980's, there has been a renewed interest in family genealogies as both local and overseas Chinese try to reconnect with their past. In some cases, family registries have been recreated from copies secretly hidden by village elders or preserved by the Chinese diaspora.

NPR Audio/Video Series: Where we come from? 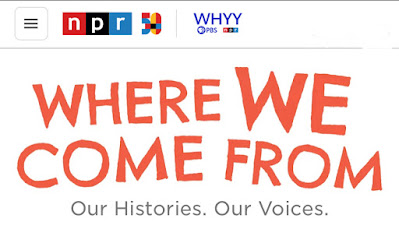 For Immigrant Heritage Month, June 2021, NPR is releasing this series of videos and podcast episodes from Code Switch, Short Wave, and It’s Been a Minute. New content is being released through out the month.

"Where are you really from? It's a question that immigrant communities of color across different generations are asked all the time. In this audio and video series, we take back the narrative and answer that question on our own terms, one conversation at a time — with family, friends and experts. These are our stories.” - NPR.org

at June 02, 2021 No comments:
Email ThisBlogThis!Share to TwitterShare to FacebookShare to Pinterest
Labels: Identity

The Chen dynasty was the fourth and last of the Southern dynasties in China. Following the Liang dynasty, it was founded by Chen Baxian, an 18th generation descendant of Ying Chuan Chen Clan founder Chen Shi. The Chen dynasty covered most of China South of the Yangtse River 長江